Exotic culture, sandy beaches and a glimpse of ancient civilization attract tourists to pay a visit to Peru. Peru is quite big in size and located in the westernmost part of South America. Home to antediluvian indigenous culture such as Norte Chico civilization and relics of pre-columbian America, Peru’s historical significance is unmatched.

There are many tourist attractions in Peru. For the convenience of our readers, we have picked so0me of them. See below the list our handpicked tourist destinations of Peru.

Huacachina is a small oasis town. The place looks amazing from an aerial view. There’s a tiny lake in the middle of sand ridges. Back in the day, the place happened to be a playground for the elites of Peru. Nowadays, Huacachina is a famous tourist attraction. Sandboarding on the mounds near the lake is fun, so is watching the calm waves in the lake’s water.

If you are beach sick, Mancora is the place for you to be. It is a small town with the best sandy beach in Peru. The pacific coastline is stretched for hundreds of kilometers. You can enjoy swimming and snorkeling along with sunbathing and beach parties on the shore. There are several resorts, nightclubs and restaurants. Foreign tourists are too keen to visit Mancora. You shouldn’t be an exception.

The Nazca lines were created by aboriginal people in between 200 BC and 700 AD. The lines are stretched from the towns of Nazca to Palpa. There are simple lines as well as animal and human figures. The complexity of drawing would make your head spin as the lines are disproportionately large. Unless you are at the ground from top, the lines won’t appear to you as meaning figures. They were first recognized by the Peruvian airlines in the 20s. There’s an observation tower for the tourists.

There’s nothing like setting foot on an unknown island! The Uros Islands are neither unknown nor natural, but they are unique for made of dried totora reeds. The islands are the most celebrated tourist attraction in the Lake Titicaca. A fascinating history is associated with the islands. Uros were a pre-Incan people. They used to live on the reeds and used them as the primary source of food. That’s how the islands came to know as Uros Islands.

All said, you could understand the forte of Peru in tourism only if you visit the country. So visit Peru and enjoy a surprisingly great trip.

Travelers will agree that Scotland is not just a country to visit. In truest word, it is one of the most celebrated tourist locations in the world. Scotland and the Knoydart Peninsula are renowned for natural beauty and a plethora of tourist attractions.

An integral part of the United Kingdom, Scotland consumes the northern third island of Great Britain and is separated from England by a border to the South. The country is surrounded by the Atlantic Ocean. Edinburgh is the largest city of the country and Glasgow is its capital.

Before visiting Scotland, one must do a research on its geography and demographics. Scotland is a safe country to be, so visitors don’t need to be extra cautious about safety. Making a list of the must see places beforehand is really important. Tourists need to zero in on the places that they are going to visit before they embark on the trip.

Some of the famous places in Scotland are Broch of Mousa, Melrose Abbey and Loch Ness. A bit of description about these places won’t hurt; let’s start with Broch of Mousa. It is a heritage site and one of the most preserved brochs in the world. Located at Shetland Islands, the rotund tower was built in 100 BC for defense purpose.

The Melrose Abbey was established by Cistercian monks in the year 1136. Legends have it that King David I of Scotland himself requested the monks to build the abbey. The ruin carries a legacy of masonic artworks. The embalmed heart of robert the bruce is visually pleasing and invokes purity of mind. The abbey keeps history mummified and blends it with aestheticity.

Remember the movie “Incident at Loch Ness (2004)”? Relax, there is no monster in that place. The lake offers an outstanding view of clean blue water, valley slopes with greenery on the other side of the shore and scattered and radiant cloud on the sky, just like someone painted them with a sponge. When you are in Loch Ness, it’s time to take a deep breath and forget the daily chores of life. And once again, there’s no Nessie hidden in the water.

There are five major airports in Scotland which jointly serve nearly 150 international destinations. Along with that, an impressive number of motorways and major trunk roads will keep you free from transport related worries. Tourist department is very helpful and cost of living is reasonable.

So go to Scotland, be in full swing of enjoyment and return back home with a cherishable experience.

Wondering where to go on your next trip? How about the city of Basilica of La Mercè? The world knows it by the name Barcelona. It is the capital of Catalonia in Spain. Barcelona is the city where you could get a glimpse of historical legacy, visit the sacred churches and cathedrals, enjoy colorful nightlife and treat your tastebud with palatable Spanish culinary delicacies. 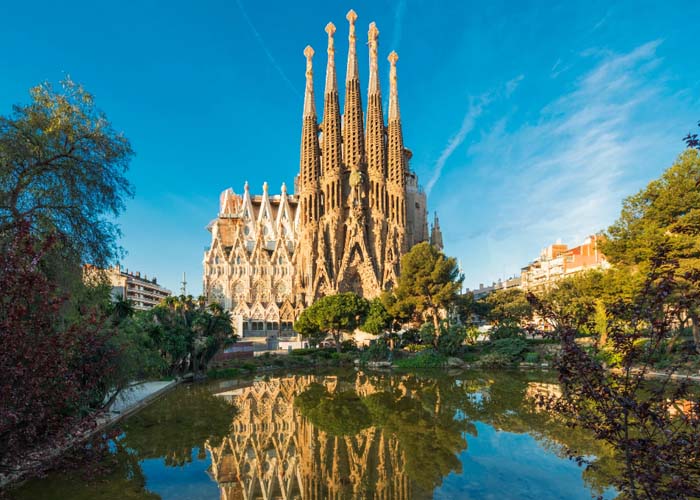 If you are not familiar with any of the places mentioned above, don’t worry, just read on!

The La Sagrada Familia is an unfinished church. It was built by Antoni Gaudi. The church is perhaps the most visited tourist attraction in Barcelona. If you want to go inside (which you surely will), you’d have to pay, otherwise you can watch it for free from the outside. The amazing sculpture is something to take note of. It would be best if you book tickets in advance because every year, nearly three million people visit La Sagrada Familia.

It is a must see for anyone visiting Barcelona. The Spanish poet Federico Garcia Lorca was so impressed by this place that he said this is the only street in the whole world he wishes not to end. The starting point of the place is Plaza Catalunya and it ends at Monument of Columbus at the Port Vell harbour of Barcelona. There’s nothing stellar to see in Las Ramblas, but walking down the street is fun.

The Barrio Gotico gothic quarter is an old medieval city in Barcelona. The city is surrounded by the an old Roman town called Barcino. There are many churches in oldest part of the city. There are also plazas, markets and museums. Underneath the history museum Museu d’Història de la Ciutat, old Roman walls and remnants of roman houses can be found.

The Park Guell was built by Antoni Gaudi. The Modernist Park is built on the Camel Hill and considered a World Heritage Site by the UNESCO. Travelers will have to go uphill in the park. Gaudi originally wanted to build a private garden city with not more than sixty houses. But later on, the park was founded. There are hop-on-hop-off buses for tourists and riding them in the park will be super fun.

Barcelona is a place with numerous ways of getting around. For convenience, visitors can use Barcelona Transport Card. Apartments for tourists are available almost all time of the year, so arranging an apartment would not be difficult. Food is available at reasonable rate. The city is safe overall except some cases of pickpocketing. Tourists are not recommended to visit Barcelona in August as the temperature remains overly humid that time.

All in all, Barcelona is a grand tourist location. So go there and have fun.

In their honeymoon, couples want to delve into each other and have all the fun in the world. They know there’s nothing to hurry. The whole world has seemingly forgotten them and there’s nobody around to interrupt.

In short, honeymoon is that chapter in life when the sealed box of romanticism is unwrapped and two lovebirds are swept by the passion of love. A perfect honeymoon requires a perfect spot. It could be a white sandy beach, a safari trip or a snowy range ski area, but the spot should be exotic.

In this article, we’ll inform our readers about some remarkable honeymoon destinations. Let’s start the list with:

This honeymoon spot is historically significant. John Kennedy came here with his adorable wife Jackie to enjoy their honeymoon. Newlyweds from all corners of the world visit Acapulco every year. The water is warm, you can dive, swim or snorkel anytime with your better half. Fine dining is another attraction of this place. The hotels are placed in convenient locations and rooms are well-designed. Even if you are on a tight budget, Acapulco Diamante is still your best bet.

The capital of France is considered the most romantic city in the world. There can’t be any better place for honeymoon than Paris. The city has a distinguished charm that attracts artists and romance seekers. Once in Paris, there are so many sights to see and so many things to do. Centre Pompidou, Sacre-Coeur, Notre Dame de Paris and the Louvre are some of the best romantic spots. At night, you can hop in the seine river cruise, dine with your spouse at the top of the Eiffel Tower or simply stroll across the serene streets.

Costa Rica is quickly becoming an amazing honeymoon destination. San Jose, the capital of Costa Rica has a very low pollution level. So you can get plenty of fresh air. Besides, romance is best enjoyed when you are far away from the hustles and bustles of the city. At San Jose, you can expect such an atmosphere. Costa Rica in general is a place where you can discover the floras and faunas of the place. Other fun-filled activities are trekking, bird watching and sightseeing.

Bali is one of best destinations for couple in Asia. Bali’s biggest tourist attractions are the white sand beaches. You could enjoy sunbath with your spouse or spend the night around fire with vodka. There are many water sport activities that you could partake in. A romantic honeymoon tour is guaranteed when you are in Bali.

Although there are plenty of other locations, the ones mentioned above are budget friendly and offer all the fun that couples would like to have in their honeymoon trip.